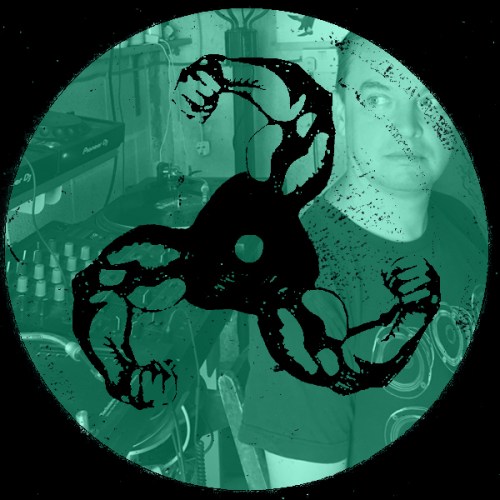 This week’s episode of the FMB mixtape series was curated by DJ & music writer, Joe Muggs. Along with a bit about the mix, we found out what he’s been up to lately…

Hi I’m Joe, I’m a writer – just putting finishing touches to my first book, on bass culture, which’ll be officially announced next month and released in the spring, and just did a nice podcast on electronic music. I’ve also been a DJ for years, but always winging it and bodging it; it’s only very recently that as an attempt to stave off the mid-life crisis I started taking it seriously. It’s paying dividends, first in making me listen more acutely in my day job, and second in doing some good gigs. Warming up I ♥️ Acid the other week was a dream, and I’ll be at Boomtown this weekend, Spiritland the 22ndof this month, No Bounds fest in Sheffield and Electro Cafe in Bristol later in the autumn.

For this I threw together a folder of stuff that sounds good at my favourite tempo (a tempo very much suited to the extreme heat), including a load of 91-93 progressive house that I found among a bunch of crates that I’d completely forgotten about but found in my mother-in-law’s loft while getting ready to move house. Also, a bunch of unreleased, new and new-ish stuff, and a sly edit I made last year. The mix was done in the garage of my new home in the forest, on XDJs and a trusty old DJM-600. Aside from pre-selecting the tunes and deciding how I was going to top and tail it, it was unplanned, and there’s a couple of, uh, human moments in it, including a bit where the EQ was left funny for a while because I was distracted by the kids coming in to tell me tea was ready. But first thought best thought, right?

Haiku Salut – I Am Who I Remind You Of

Kams – Walk Along The Wall

Marquis Hawkes – Hope In Our Hearts

Ben Hauke – Get Up To Get Down

Mugford – Fix It In The ‘Mics

Haiku Salut – I Am Who I Remind You Of

This entry was posted in FMB MIXTAPE SERIES and tagged feel my bicep, fmb mixtape, joe muggs. Bookmark the permalink.